Right at 5 weeks, our friend Molly and her husband Bodhi had an annual getaway weekend in Breckenridge to celebrate her birthday.

I was confronted as to whether we should go or not. I didn’t know if it was appropriate for us, how Molly would feel, how others would feel, and we hadn’t thought through how or when we wanted to tell anyone besides our immediate family.

On the other hand, we were just at 5 weeks, and I didn’t think it was right to miss out on celebrating one of our favorite people! So, I decided it would be best to have a conversation with Molly to see how she would feel about us going and not partying as much as usual, but I didn't tell her why.

I guess I hadn’t thought it out enough, because Molly’s immediate response was, “so is this a preemptive measure to get pregnant, or are you pregnant.” Oops, well there was the first lesson: people might guess if you dither around the truth. (And I guess I was silly, because she knew we had been trying.)

Anyway, I couldn’t deny it and confirmed the news, and of course she wanted us to be there for her birthday.

I still wasn’t sure if I was ready to be pregnant in everyone’s eyes yet, but given the conversation with Molly, I knew if we went, that we should be ready to tell, to avoid people just guessing and missing out on sharing the news right-out (or having to deal with the wrath of wonderings).

And finally, the choice was solidified when Molly’s husband Bodhi got home, and he was more than encouraging about us going and being free and having fun, so we decided to go!

And what I learned is that telling people early means you get to continue being yourself and do the things you love; you don’t have to change overnight, and your get friends’ get to support you early in the process, including if something “were to happen.”
Posted by Stacy No comments:

Sweetest Valentine note with flowers ever

Aaron really surprised me today. He not only sent me flowers, but included a note that stopped me in my tracks at work, (which isn’t an easy thing to do when I’m in work mode).

It read: “Happy Valentine’s to the two biggest loves of my life. Love you, Aaron.”

I went into a meeting with my boss and co-worker teary-eyed, and I can’t even look at the notecard without getting emotional.

Note:  Before getting pregnant, I would have NEVER used the pronoun “I” and any conjugate from of the word “emotion” in the same sentence.
Posted by Stacy No comments:

Ask Me if I am Surprised? Telling the Boss

While I have been challenged with nausea and tiredness, I have been feeling a lot of stress needing extra time in the mornings and requesting to work from home more than usual lately.

I’m stressed, because I am committed to my job, and having to be a flake around my schedule without others knowing why, makes me feel out of integrity and like I can’t be myself or get things done. The stress was heightening and starting to impact other things too.

So, I ignored society’s opinions about waiting three months to ensure nothing goes wrong and told my boss today that I am almost two months pregnant.

I’d be lying if I said I wasn’t afraid he might be disappointed or mad, or worse, write me off as a person and put me on the list for upcoming budget cuts—he is the Chief Information and Technology Officer. However, that was not the case…

His first response: “Ask me if I am surprised.”

I played along and asked with some reluctance, “Are you surprised?”

He replied, “I am not surprised, because my daughter is going through the same thing, and she has been sharing her challenges with me and breaking the news at work, and I have sensed and noticed the same in you. Congratulations.”

It was a short conversation, because we both had to run off to other things, as is usual in our busy working environment. But I was able to learn that his daughter is five weeks pregnant, and it will be his first grandchild.

I couldn’t feel more blessed. I mean, how lucky am I? I get to work for a boss who is probably going to know what’s coming during this adventure before I do. I’m so glad I followed my heart and didn’t let fear or societal rules stop me from telling him when I felt it was right! (I’m not much for following rules anyway.)
Posted by Stacy No comments:

I think I have some sort of domestic super powers. I just made the best batch of chocolate chip cookies ever–I mean look at them below, and I can’t even tell you how perfect they are. Of course, now I need a nap. 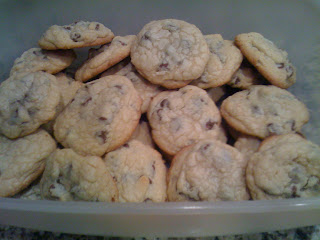 First “visual” symptom: Big bOObies (it's all about the boobies)

The first “visual sign” I was pregnant was my boobies got larger and really firm. I obviously wasn’t anywhere near breastfeeding. These things just must just know that they have a big job ahead them, or maybe it’s a special thing god does for marital relations before the belly starts growing.
Posted by Stacy No comments:

Three out of three men we’ve shared the news with in person have teared up. Although totally excited and full of happiness, women haven’t cried at the news.


A few minutes after we told my mom, dad, and brother, I was walking downstairs when I heard my dad speaking under his breadth. I asked, “dad, what are you saying.”

At that moment my brother poked his head out of the bathroom and said, “he’s been standing over there saying this is wonderful over and over.

I looked over and said, “oh dad, you’re going to cry before mom does.”

And my brother replied, “no, I am. I just looked over at dad and pictured him as a grandfather,” and the my brother's eyes filled with happy tears.

Then my brother preceded to text his best friend to let her know my season ski pass is for sale, lol.
Posted by Stacy No comments:

A wadded up piece of bread…in the oven

I always thought that if I ever got pregnant I would break the news to my family by putting a bun in the oven and somehow position them to discover it, and then I’d watch them make the connection. I read this idea on the Internet many years back, and I thought it would be fun.

The only problem was, when it came time to tell my family, I didn’t have anything resembling a bun in my kitchen, and I couldn’t justify a trip to the grocery store just to satisfy a practical joke.

So I got creative with something I really thought would work. I put it in the oven, and I turned on the oven light. It could clearly been seen from my dinning room table, so I asked my mom, dad, and brother to gather around, so that we could talk about the schedule for the rest of the evening.

My mom took forever to get out of the bathroom, and finally when we were all together, my stud-muffin husband had to relieve himself, and if that wasn’t enough, the moment I started gesturing to the oven, my dad got up and had to take a nature break as well.

Oh well, I got 4 out of 5 of ‘em and continued the prank. My brother was first to approach the object. He hesitantly opened the door, stared at it for a second, and then poked it several times with three different fingers and said, “I don’t know what that is.”

I again asked, “What is it though.” So my mom approached, quickly opened the oven door, and without any reservation declared, “I know what that is. It’s just a wadded up piece of bread in the oven.”

And at that moment, my dad walks out of the bathroom and bellows, “What? You have a bun in the oven?”

I calmly replied, “yes,” and received three simultaneous, “WHAT?”s. I replied again, “I have a bun in the oven.” Dad backed up against the refrigerator as if his legs could no longer hold his weight, mom said, “what,” no more than three additional times at a very high pitch, and the corners of my brother’s mouth expanded wider than I’d seem them in a long time.

That was fun.
Posted by Stacy 2 comments:

The very first symptom I had was boobie aches, and I had them literally two weeks after conception (one whole week before I’d even be able to test positive with a pregnancy test). I remember Aaron and I were eating smothered burritos, and I couldn’t keep my posture because of the aching.

I suppose I should have clued it, but I just thought I was about to start my period and was having a weird month. Plus, I wasn’t obsessing about getting pregnant. I was just taking it easier in life and out to have a good burrito. 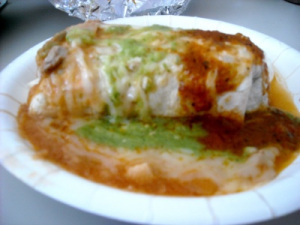